I told you that every time I create a project, I create a support team around me. So this week-end, applause goes to my cousin. She is like a sister to me. We are the same age and we have so much fun together. What did she do to deserve such devotion? She made it possible for me to escape the city this week-end and took me in the middle of the woods, 6 hours away from home to my uncle’s (her father) place. It is quiet, dark, and it’s just the perfect place to write.

Of course, it’s not like I’m sitting there and everything happens. But I took the time this morning to look around to find something to trigger inspiration. So… In this fabulous modern house, here is what I found : a wood stove. Magnificent! My NaNo story could totally use that kind of object, since I’m working on a story where everybody had that kind of stove during that time (around 1860-70). So today I described a kitchen and there it was. I won’t keep the scene probably at the end, but you know it was fun.

Tomorrow, I may show you the “machete”. Don’t know where I’ll put that in the story, but hey, let’s have fun with this. 🙂

With great respect and love! 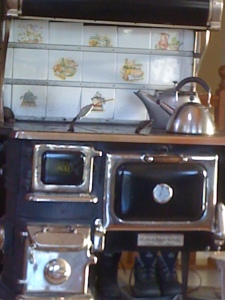 You are welcome to leave a Reply Cancel reply